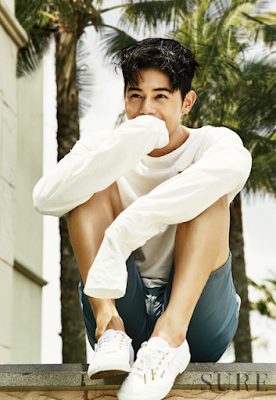 It’s been more than a year since I last updated this blog and looking back at my last two posts (Joo Won, Sung Si Kyung), it seems that every time I update it, it’s because I discovered another artist and I want to gush about him. This time it’s no different. I am introducing my current favorite: Kim Dongjun. 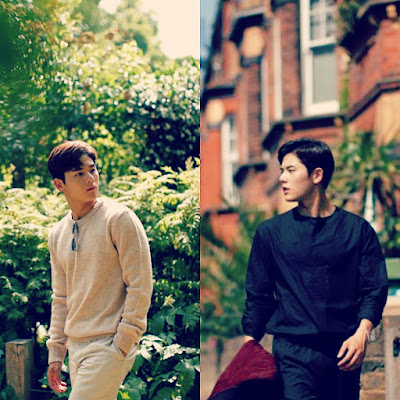 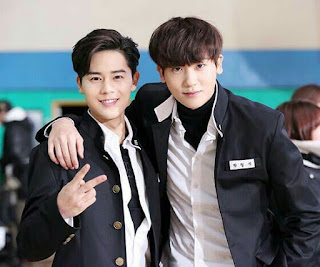 It all started when I watched Strong Woman Do Bong Soon last February and fell in love with the main OTP. Honestly, the story and plot could’ve been better but the OTP saved it. I enjoyed Park Hyungsik and Park Bo Young so much together that I turned a blind eye to the story, its plot holes, and some of its annoying narratives. Like what I usually do when I’m new to an artist that I like, I would try and trace their celebrity roots - extensively. Park Hyungsik was a member of an idol group called ZE:A (제국의 아이들 or Children of Empire). I’ve never seen ZE:A before but I’ve heard about it. First because of Hwang Kwanghee who I liked watching on variety shows (I actually saw him first on Joo Won’s guesting in Healing Camp and he was funny) and then because of Im Siwan who I googled when I was watching Misaeng but since I wasn’t into them that much, I never really checked ZE:A before. 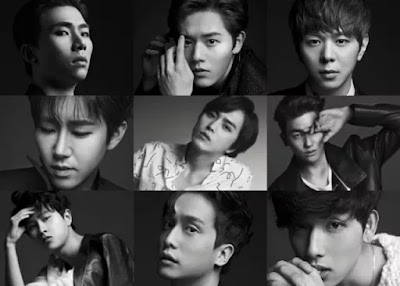 Hyungsik was a different case because I really liked him after SWDBS and it looks like I found a new favorite. So, I watched all his dramas and all the variety shows that he was on. It was only natural that I also trace his history with ZE:A. I ended up watching a TON of ZE:A videos. From their pre-debut reality show to their guerrilla concerts and wingcar performances and just about every variety show that they’ve guested on. At first, I was only watching for Hyungsik. I didn’t bother to learn the names of the members at first but the more I watched them, the more I was drawn to them. And since I’m watching so many videos about them, I got to know all of them soon after. They are all really talented, funny, hard working, and sincere. Their pre-debut reality show was kinda heartbreaking to watch because they’ve been through a lot and I feel for them. In the end, I became a fan. (Me becoming a ZE:A fan especially at this point when they’re most likely over is a whole other story).

From a video of Park Hyungsik guesting on People Inside (together with Kwanghee, Siwan and Dongjun), I learned that he was the main vocal of the group. It was during this time that I was also slowly becoming a ZE:A fan so I was watching a lot of their music videos, live performances and radio guestings. I’m not familiar with positions in Kpop so when I heard Hyungsik saying he was the main vocal, I immediately downloaded all their singles and albums and started listening to them nonstop. While listening to their songs, another member's voice caught my attention. This guy’s voice is really good that it actually stood out for me. It's powerful and clear. His low notes and high notes are impressive and he has really great vocal consistency. Yup, this was Kim Dongjun. He was the group’s maknae and he was also a main vocalist (since apparently, you can have more than one main vocalist.)


That’s how I started to slowly notice him. And the more I watch ZE:A videos, I kept noticing him more and more. Aside from his voice, this guy has one of the most gorgeous smiles I’ve ever seen. And his eye smile is to die for. He is just too cute for words. He can be super hyper at times and then turn sexy at a drop of a hat.

Then I stumbled on a video of him winning gold medal in Idol Star Athletics Championships. It’s a program where Kpop idols and some other celebrities compete in different sport events like track and field, archery, high jump, futsal, basketball, etc. I didn’t even know this was a thing! (See how out of touch I am with Kpop in general?) The video below is the one I first saw, him winning in 110m hurdles back in 2011.

I was super impressed and my interest in him rose up a lot. I always find sporty guys super cool especially those who don’t look like it but will blow you away. I keep watching more videos of him and I learned that Dongjun is one heck of an athletic guy. Aside from track & field, he’s also good in archery, soccer, and basketball. He also plays bowling and golf. He really is amazingly athletic and he said so himself in vlive that he really has a knack with sports. Like he could try and learn any sport for the first time and be good at it - sometimes right away and other times, with more practice. I watched a video of him trying snowboarding for the first time in Japan and saw him fall a couple of times and just when I thought that finally there’s something he can’t do, the next scene showed him snowboarding like a pro. There was also one time when he was asked to be a substitute in a sports variety program called Cool Kiz on the Block and they were playing badminton. He was a beginner and played badminton for only 7 days but he showed so much promise playing against more experienced players. What’s even more amazing was that he kept getting better and better even while playing in the game.

Interest piqued, my attention started to shift from Hyungsik to Dongjun. Like what I did with Hyungsik, I watched all guestings, variety shows and dramas that Dongjun was a part of. (I even rewatched those ZE:A videos again but now with a different focus.) Below are videos of him killing it in Immortal Songs 2. The first video was him competing solo for the first time (since he was there previously with ZE:A members) and winning the trophy immediately on his first solo appearance. He rendered everyone speechless with his performance - from the audience to the singers in the waiting room. And me, who was totally engrossed watching from my mobile phone.

Song: You Outside My Door

In getting to know Dongjun, it’s impossible not to find out about Let’s Go Dream Team. It’s a defunct sports variety program on KBS and Dongjun participated quite a lot of times there. He was a semi-fixed member from 2010-2012 and was the youngest of the Dream Team members but he was one of their aces. In this program, they usually compete with non-celebrities/normal people on an obstacle course.

I LOVE Dongjun on this program and you could say that watching him here and on ISAC was one of the biggest reasons why I became a huge fan. I love that he always does his best and he loves competing with himself and pushing himself to his limit. Although, I also learned that Dongjun is weak when it comes to pressure. Most of the time, when he’s under so much pressure, he makes mistakes and ends up failing.

The more I know about him, the more impressed I am. He is actually so much fun to watch on variety shows. I enjoyed his stint in Law of the Jungle where he really excelled. Watching his vlive videos, I also found out that he’s a bookworm! A guy who reads. Damn. And he was even recommending some books to his fans at one time. I also saw a fancam of him at the airport and he was holding a book while checking in. Definitely a guy after my own heart.

Dongjun is one of those idols who have transitioned to acting. Especially now that ZE:A has disbanded on indefinite hiatus, he is currently more active in dramas. Because of him, for the first time ever, I challenged myself to watch a 125 episodes daily drama. He was one of the leads in 2016’s Still Loving You and since it was a daily drama, it was as makjang as it could get. I hated a lot of characters, and fast forwarded a lot of scenes too (especially those of the 2nd female lead) but I couldn’t drop it coz I want to support him. (All episodes are available on the official Youtube channel of KBS World so yes, my views count legitimately, lol.) Don’t get me wrong, it’s a good drama overall but to achieve 125 episodes, there will be absurd situations for sure.

With Joo Won currently in the military, all my fangirling attention at the moment is focused on him. He has an upcoming drama in October called Black and I’m hoping it’ll be successful. Although he is playing a second lead here, he is together with more internationally popular stars like Song Seung Heon and Go Ara. Even though their acting is, well, nothing to write home about but I’m putting my faith in the director and writer that the story will be good and hopefully there would be a lot more international audience who will check the drama.

I want him to become more famous so he can be on a lot more shows - whether in dramas or guestings on variety shows - so I can watch more of him.

The bgm "Healing" is his own composition and
it's a beautiful song. Damn talented.