Dirty Red (Love Me With Lies #2) by Tarryn Fisher 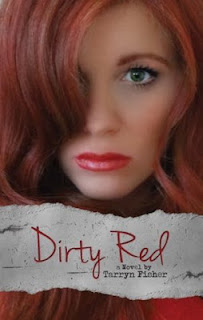 “Love is illogical. You fall into it like a manhole. Then you're just stuck.
You die in love more than you live in love.”

“I have done a number of things to keep this man. I have lied and cheated.
I have been sexy and meek, fierce and vulnerable.
I have been everything but myself.”

You thought you could take him from me, but you lost. Now, that he's mine I'll do anything to keep him. Do you doubt me? I have everything that was supposed to be yours. In case you were wondering; he doesn't ever think about you anymore. I won't let him go....ever.

Leah Smith finally has everything she has ever wanted. Except she doesn't. Her marriage feels more like a loan than a lifelong commitment, and the image she has worked so hard to build is fraying before her eyes. With a new role and a past full of secrets, Leah must decide how far she is willing to go to keep what she has stolen.

I remembered I bawled my eyes out after reading the last sentence of The Opportunist. I was so emotionally invested in that book that up to now whenever I do a re-read, I will always be left emotionally battered. I was distraught thinking that, that couldn't be the end of that story until I learned that, that book is actually a part of a series and the second book will be out by the end of this year.

I felt alive once again thinking that I will get my HEA after all. And then I learned that the book is titled Dirty Red and it is on Leah's POV. I didn't know what to think. Leah is such a hateful character in the first book and I'm not sure if I can stand a whole book in her POV.

After reading the book, I realized that yes, I can stand a book written in her POV. And furthermore, I find that it was quite interesting to be inside her head. It was crazy, she's psychotic but nevertheless, interesting.

Tarryn Fisher did it again with this book. Though I was not that totally emotionally battered here, because like I said, I didn't like Leah first of all, and I was totally rooting for Olivia and Caleb. But this book is also really good. Tarryn Fisher is really good in writing complicated love stories and not happily ever after endings.

So, there will be a book 3 and this time it will be on Caleb's POV. I'm just so freakin' excited for it because even though I said that I think Tarryn Fisher doesn't do happily ever afters, I'm still hoping that by the end of this series (especially after the ending we had with Dirty Red), I will finally get my happily ever after. I just don't know what's gonna happen to Noah because he's a character that I really like in the first book and further liked in the second book (though his appearance is very very brief.)

Leah is a bitch, yes, but her side of the story definitely deserves to be told.