Castles on the Sand by E.M. Tippetts 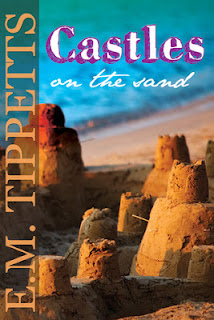 "Please do not tell me you've decided he's a misunderstood, tortured soul and you've fallen madly in love with him."

Madison Lukas knows her place in the world. She’s not pretty, not interesting, and therefore easy to forget.

John Britton is serving his mission for the Church of Jesus Christ of Latter-day Saints, and has been praying for fifteen years to find the sister he lost in his parents’ divorce. She is beautiful, talented, and makes kindness a fine art.

When John and Madison cross paths, he recognizes her at once, but Madison is certain that he’s got it all wrong. Even if she is his long-lost sister, she can’t possibly be the exceptional, amazing girl he thinks she is, can she?

Okay, this is definitely a long overdue review. RL is hectic these past few weeks. With winter fast approaching, the travel industry here in the country is getting damn busy.

Anyway, onto the review.

I admire Ms Tippetts' ability to write a story with characters so well rounded. The traits of her characters are not over-the-top. They're not wholly good or totally evil. They're just individuals who were flawed and it felt real.

I find Madison a wonderful heroine. She's stuck in a sad home with a mother who doesn't care for her and who buries herself in her pottery as a form of escape, but she's a strong girl with definitely a good head on her shoulders. She comes across as a bit of naive at times but we can attribute it to her lack of adult guidance at home and limited experience. I do question her actions and responses sometimes but throughout the book, I see her make wrong choices, learn from it, and develop fully as a character. Basically, she grew up as the book progressed.

John is adorable, for lack of a better word. I think he's too good sometimes but he can also be annoying too. I love that he has no qualms in telling Madison he loves her and wants to reconnect with her.

I didn't get Kallie at first. I wasn't sure whether to like her, or hate her or just spend a little bit more time understanding her before passing on judgement. She seems to be a good friend at first but after trashing Madison's Facebook page, I was wary of her. Friends don't do that! No matter how much you pissed them off. Unless it came to a point where you cut ties with them but Madison and Kallie didn't get there (well, at first). However, Madison's silent acceptance of the treatment made me doubt. It made me think that maybe aside from Kallie's situation at home, there was something deeper there? But no, for me it wasn't enough to justify her actions. And it just made me realized that Madison's acceptance of Kallie stemmed from the fact that she actually do not have a lot of close friends other than her.

I could care less of Madison's two suitors. One of them is a jerk who treated her badly, and just wants to fool around with her but doesn't really want to be a couple. The other one is nice enough but just totally not for her. Good thing there is a third and he's definitely fit for her.

From the very first mention of Alex, I already knew he and Madison will end up together. I just don't know how. That is why I was eagerly waiting for his story. And Ms Tippetts didn't disappoint in painting Alex as the male lead. He may appear to be a bad boy but he is not. A tortured soul yes, but definitely not dark. His family life at the moment is messy and I feel for him. God, I cried during the scenes with his mother. I must say those were done exceptionally well.

And finally, I wanna comment on the amount of LDS stuff in this book. (I know some readers get a bit skittish when religions get discussed/mentioned a lot in a book.) I'm not a member of LDS and have absolutely no idea about the religion. I know the author is, though. However, if others thought that she was pitching the religion, it didn't seem that way to me. (Because if she was, I don't think she'll put those stuff that Madison found on the web.) It felt normal to me. Just a book about two siblings finding each other and the other sibling just happened to be a Mormom. It's there because it works in the story. That's it.

Sometimes you read a book from a new author you just found out and it turned out good. It makes you want to read another book of hers/his. However, sometimes the next book (and the third) you read is not good and it makes you think that maybe the first one you read is a fluke. I'm so glad this book of E.M. Tippetts is not. Someone Else's Fairytale (my first book of hers) may be easier to get into because of the familiar plot but Castles on the Sand is amazing as well. I'll be looking forward to the author's future works.

***Free copy of the book received from the author.***