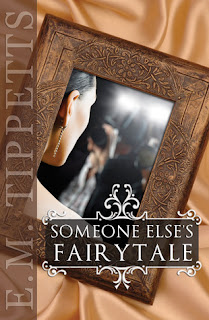 Fairytale endings aren't just for normal people. Us abnormally famous guys want them as much as the next person.

Jason Vanderholt, Hollywood's hottest actor, falls head over heels for every girl, Chloe Winters, who hasn't gotten around to watching most of his movies. She becomes the woman every other woman in America is dying to be, but it just isn't her fairytale.

This is my first book of EM Tippetts. The book cover caught my attention at first, I don’t know why. I just remembered I squinted to see what actually is going on in there. And then, I read the blurb. I must admit, famous guy/normal girl plot always makes me curious. Maybe because I know that although it happens in real life, it is not the norm. And then, I get curious as to how the author will handle this plot. Will she make it so cliché? Will it be fast love again? How much trouble will the paparazzi and crazy fans make this time?

Chloe Winters, as a character, is relatable to many people. Her family background is not ideal. She has problems and fears. A mostly absentee mother, a father who doesn't acknowledge her, half-siblings who doesn't care about her. She focuses in her studies in order to get over her past. She has friends she can rely on, although, one of them turned out to be such a douche. She’s seems real.

Jason Vanderholt is indeed swoon worthy. Not only because of how he was described, but because of how he acts around Chloe. He’s always sensitive about her feelings and treats her with utmost respect. He’s not perfect as well. Like most real life celebrities, partying hard and women were some of his mistakes too in the past.

The plot seemed light at first. And then the author keeps dropping hints here and there about Chloe’s past. Then the readers were shown this past and it was dark and it was scary. I appreciate the back story because it made me understand her better.

No fast love here too. Chloe was not charmed by Jason during their first meeting unlike her other friends. Instead, she and Jason become good friends first. They went through some trust issues, insecurities, failed relationship attempts, crazy fans, snooping paparazzi and insane brother before they become a couple. However, when they finally get together, there will be no doubt in the reader’s mind that they indeed belong to each other.

The ending may be too much of a fairytale already. However, I find it understandable why it was necessary.

I’m glad to have stumbled on this book. It may not yet be popular, but it is a good one. I enjoyed it a lot.

20SEP2012, 1730H: UPDATE
I visited GoodReads earlier and went to Ms Tippetts' author page and learned that there will be a sequel to this novel. The cover is out already. I'm so excited!!! Here's her post about it.