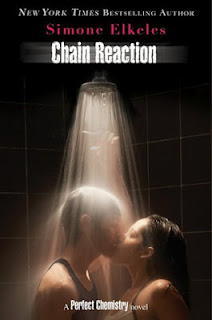 “Love. Is it just a word that boys use to manipulate girls?”

Like his brothers, Luis Fuentes is a risk taker; whether he's scaling the Rocky Mountains or dreaming of a future as an astronaut, Luis is always looking for the next thrill. Nikki Cruz lives her life by certain rules -, don't trust a boy who says "I love you", boys lie to get their own way and never date a boy from the south side of Fairfield. Then she meets Luis at his brother Alex's wedding and suddenly she's tempted to break all her rules. Getting Nikki to give him a chance is Luis's biggest challenge, until he finds himself targeted by the head of the gang that nearly destroyed his brothers' lives. Will Luis's feelings for Nikki be enough to stop him from entering a dark and violent world that could prove to be the ultimate risk?

With this final installment of the Perfect Chemistry series, we now bid adieu to the Fuentes Brothers. It's always kinda sad when a series ends. The Fuentes brothers grew on me and I will miss them.

After Alex, I think Luis is my next favorite Fuentes brother. I like that he has aspirations in life. He's smart and he's definitely using it to advance in life. He wants to apply in NASA and be an astronaut. Cool, right? He also doesn't appear to be a jerk but he's still a playboy and mischievous like his brothers.

In Nikki, we finally have a non-white female lead. I was waiting for this because for sure Simone Elkeles wouldn't make all her female leads white and American. So, yes, Nikki is Mexican though she grew up more American than Mexican. Among all the other female leads, Nikki is the one most broken but she's definitely the strongest. At a young age, she has experienced a miscarriage aside from being heartbroken. I like how Nikki managed to get over her demons, learn to trust and fall in love again.

As usual, the gangs are still present here. Good thing this is the last book because honestly, I'm a bit getting tired of the involvement of the gangs. The conflict is no longer a surprise. (But Simone did manage to insert a surprising twist about Luis life in this story.)

The plot is not new and it's not as strong as the two previous books but still worth reading.

*book description and pic from Goodreads
Posted by Lei at 1:31 PM