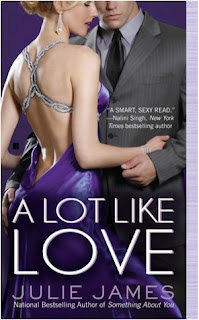 “He didn't care whose league Jordan was in. All that mattered was that she was his.”

The FBI wants her cooperation. As the daughter of a billionaire and the owner of the city's top wine store, Jordan Rhodes is invited to the most exclusive parties in Chicago. But there's only one party the FBI wants to crash: the charity fundraiser of a famous restaurateur, who also happens to launder money for the mob. In exchange for her brother's release from prison, Jordan is going to be there—with a date supplied by the Bureau.

Agent McCall just wants her. As the top undercover agent in Chicago, Nick McCall has one rule: never get personal. This "date" with Jordan Rhodes is merely an assignment— one they're both determined to pull off even if they can't be together for five minutes before the sarcasm and sparks begin to fly. But when Nick's investigation is compromised, he and Jordan have no choice but to pretend they're a couple, and what starts out as a simple assignment begins to feel a lot like something more.

I think by now I can say that I've become a full-fledged Julie James fan. The first two books that I've read from her are such a win and this next installment of her FBI/US Attorney #2 is also the same!

I was entertained with the characters of Nick McCall and Jordan Rhodes. is this rich and beautiful billionaire heiress who actually is a financially independent woman. She owns a wine store and manages it with a business acumen befitting of the last name . She's all woman but she's not whiny, not clingy and she’s definitely no Paris Hilton! Nick McCall is the undercover FBI agent who needed Jordan Rhodes to infiltrate a party thrown by Xander Eckhart who the FBI believes is laundering money for Roberto Martino, head of a big crime syndicate in . Nick is all business and professionalism. He doesn’t have the best first impression of Jordan Rhodes and it doesn’t help that he thinks she’s a spoiled princess pampered since birth. He’s tough, rough around the edges, a bit pushy and ofcourse, hot.

The dialogue is once again snappy, witty and sharp. The banter is obviously sexually-charged. Chemistry is floating all over the pages.

I was surprised and happy to see previous characters in Something About You here. Jack Pallas is Nick McCall’s colleague and Cameron is now the new US Attorney in charge with the case of ’s brother.

Another Julie James book that I enjoyed and loved. Though I think Jack and Cameron love story in Something About You still takes the cake, I must say that I was still thoroughly entertained with Nick and ’s love story too.