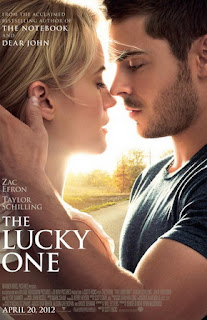 A Marine travels to Louisiana after serving three tours in Iraq and searches for the unknown woman he believes was his good luck charm during the war.

I've read Nicholas Sparks' books before. I've seen the movie adaptations of these books. I've loved The Notebook and A Walk to Remember (the others not so much). Hence, I am used to the Nicholas Sparks' formula.

When I was watching this, I have no expectations because I am sure it'll just turn out the same. Zac Efron who now sports a stubble and is in a bulkier form than during his High School Musical days plays Logan Thibault. I must admit, I have such a crush on his name. (Obviously, it reminds me of Jason Dohring's tortured bad boy character in Veronica Mars so that's a plus point already.) Anyway, Logan is a U.S. marine who after servicing his third duty in Iraq went on a journey to find the woman in the photograph that he credits as the one who kept him safe during his stint in Iraq.

However, there is not much of a journey as he finds her easily after just a couple of minutes walking and asking around bars. So, okay, I don't begrudge them of that because, hey, this is fiction and the journey is actually not that important in the movie. He met her but for some reason had a hard time explaining why he actually came to Louisiana from Colorado. Beth mistook him as an applicant for a job in their dog kennel. He accepts and thus begin their journey of would they get together or not. And of course, you know they would.

I kinda feel bad for Taylor Schilling for having partnered to someone that is prettier than her. She looks so old in here and although Zac Efron tried to look mature and rugged, his young pretty boy looks still cannot be overcome. That's why I cannot buy them as a couple. It feels forced and contrived and no matter how many sexy moments they have, I will never be convinced.

The only characters that I find lovable are Ellie and Ben. They make me smile whenever they are onscreen. I also adore the gorgeous Louisiana setting and the dogs, man, they are so freakin' cute! I could care less about the ex. And of course since this is a Nicholas Sparks' film, someone has to die. (Though tissues are not necessary. As I mentioned: contrived!)

I really want to like it. I hoped they selected actors with more believable chemistry and I really hoped the story wasn't such a big cliche. (Zac Efron is eye-candy, so I guess his fans won't be disappointed.)

*pic from Wikipedia
Posted by Lei at 2:16 PM