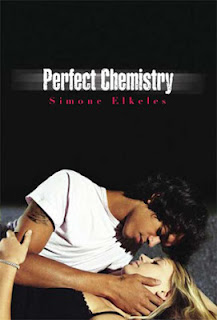 “We're actors in our lives, pretendin' to be who we want people to think we are.”

When Brittany Ellis walks into chemistry class on the first day of senior year, she has no clue that her carefully created 'perfect' life is about to unravel before her eyes. She's forced to be lab partners with Alex Fuentes, a gang member from the other side of town, and he is about to threaten everything she's worked so hard for: her flawless reputation, her relationship with her boyfriend, and the secret that her home life is anything but perfect.

Alex is a bad boy and he knows it. So when he makes a bet with his friends to lure Brittany into his life, he thinks nothing of it. But soon Alex realizes Brittany is a real person with real problems, and suddenly the bet he made in arrogance turns into something much more.

In a passionate story about looking beneath the surface, Simone Elkeles breaks through the stereotypes and barriers that threaten to keep Brittany and Alex apart.

I've had the copy since last year but I never got around to reading it. I blame the cover for this because really, sometimes a good cover will give you that kick you need in order to start reading.

For this book, I got the kick from Goodreads. While looking for good YA novels to read, this book always comes up as one of those highly rated stories. I resisted for a long time but last Friday, I finally looked for my own copy and started reading it. It has 300+ pages. I thought I was definitely in for quite a long read.

Turns out, it's not that quite long after all. I feel like I devoured this book. It was good.

Of course the story has a cliche plot. Brittany Ellis is the popular and pretty rich girl while Alex Fuentes is the cocky, troublemaker bad boy from the wrong side of the tracks. A slight squabble in the parking lot turned into a small altercation in front of the school was further worsened by being stuck as Chemistry lab partners. The start of senior year is definitely not looking very well for Alex and Brittany. Both have known each other from school and both hated each other for their reputations. Alex hates Brittany's seemingly 'perfect' facade. Brittany hates Alex's gangbanger status.

However, unknown to each other at first, both are putting an act in front of their friends and schoolmates. Brittany's perfect life isn't so perfect after all. Her sister has a cerebral palsy. Her mother cares more about the reputation of their family to outsiders rather than her children. Her father will rather put long hours at work than stay at home. Brittany has always felt intense pressure from her mother to be perfect in every way. She knows it as a compensation for the fact that her sister is miles away from being perfect.

Alex is involved with Latino Blood, a violent street gang that deals with drugs, but not because he likes it but because when you're living in the south side of Fairfield, it's the only way to survive. You're either with the gang or against the gang. Alex needs to protect his family and as the head now of the Fuentes household (his father was murdered when he was six), he needs to do it to keep them safe. Even though he is smart, aspirations for college seemed to be just a fantasy in his reality.

Fairfield, Illinois in some ways is like Neptune, California. (Yes, a Veronica Mars reference... again!) Latino Blood reminds me of the PCH gang (though the PCHers are less violent, I think) and Alex Fuentes reminds me of Weevil. Brittany somewhat reminds me of Lilly but only because she's rich, pretty and popular. (Her personality is way far from Lilly.) The issues of social class and racial discrimination in this story are eerily familiar.

Simone Elkeles handled all these issues plus the romance pretty well. I find the story well-researched and the Spanish words inserted now and then adds an authentic flavor to the novel. (I had a year of Spanish in college but even though you haven't, I don't think you need to Google Translate. The context is pretty easy to understand.) The characterization of the characters are spot-on. The exchanging POVs actually helped the readers understand the characters and get to know them better. Also, it doesn't hurt that Alex and Brittany does have an amazing chemistry together.

I kinda feel bad that I let the less than stellar cover halt me from reading this book. I really enjoyed reading Perfect Chemistry. It's cliche yet it feels different. It's unconventional but it really worked.

I'm currently reading the next book and although at the moment, the male protagonist (Alex's brother, Carlos) irritates the hell out of me, the book is also strangely addictive.