We Got Married: Ssangchu Couple

You are cordially invited to the wedding of the two most unlikely couple. 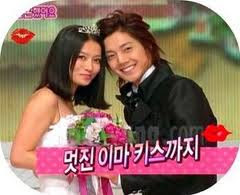 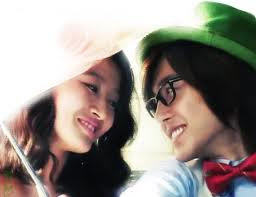 Witness as Kim Hyun Joong (of SS501, Boys Over Flowers) 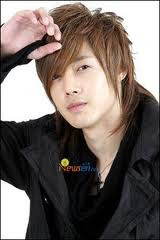 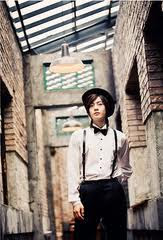 ties the knot with 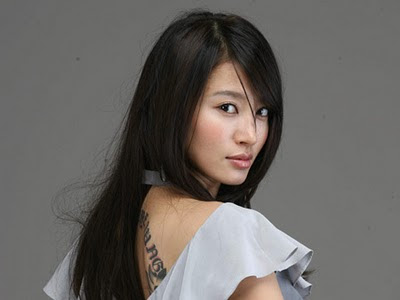 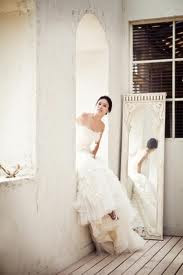 Thought it was real? Well, I (as well as other JoongBo lovers) hope so. 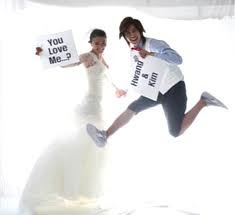 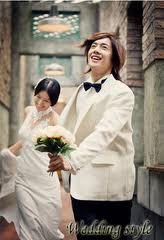 In the Korean reality show We Got Married, popular Korean celebrities are paired up with each other to show what life would be like if they were married to each other. Kim Hyun Joong was paired up with Hwang Bo who is actually six years his senior. They were called the older/younger couple. 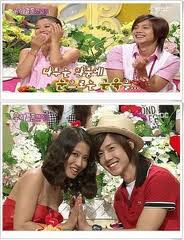 We Got Married, as far as I know through research, has no scripts. They only make the couples do a mission based on the prior situation arranged for them. Well, okay they have scripts in terms of production planning, like the honeymoon, house, everything that has to do with budgets. The dialogues are left to the actors. It also means that the gestures, the conversations, the actions are all spontaneous, real and almost 90% of what they would do if they were really married.  Also, since it is a reality show, the real lives of the couples are also included in the show. For example, for the JoongBo couple, we get to see the SS501 members since Hyun Joong is a part of them. Also, Hwang Bo goes to events related to her work.

The show features other couples but I will focus on Kim Hyun Joong and Hwang Bo or the Ssangchu Couple (Lettuce Couple as they were nicknamed), since they were actually the only ones that I watched in this show. And I am crazy about them. 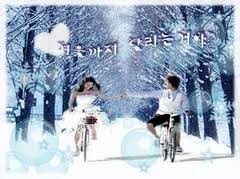 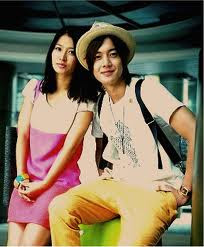 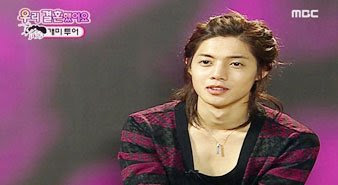 Hwang Bo Hye Jung
nicknames: Hwang Buin, Buin(wife), Yeobo
The first time I’ve seen Kim Hyun Joong was when I saw the MV of Snow Prince, a song by SS501 in Arirang’s Showbiz Extra back in 2006. I immediately like their group and I started to listen to their songs. However, I wasn’t yet obsessed with them so I didn’t look them up on the internet. I was listening and liking their songs but I actually didn’t know their names.  Months after that first encounter with their group, I started to immerse myself in other idol groups and wasn’t able to listen to their new songs. Last year, the buzz of a new version of Hana Yori Dango in Korea exploded. I knew about it but I wasn’t that much eager about it then so I wasn’t following their search for casts. When finally the official poster for the drama was released I went to look at it and somehow felt that the one who would be playing the Hanazawa Rui character (which is Ji Hoo) was familiar to me. It didn’t occur to me then that he was the one from SS501 because in the poster, his hair was blond and Kim Hyun Joong’s hair was originally black. It was when I started to read some articles about the drama that I realized that he IS Kim Hyun Joong.I didn’t like him that much in BOF. I am not going to repeat what I thought of his performance here. You can read it here in my review of BOF and here too. If it wasn’t for the fact that he resembled Bae Young Joon so much, I wouldn’t feel even a tiny bit of compassion for his character.
On the other hand, I never knew about Hwang Bo before watching this show. Her girl group debuted way back in 1999 and they disbanded in 2004.

But then accidentally, I decided to watch We Got Married (JoongBo Cuts = their couple story only). I actually don’t know how I stumbled upon it. It’s not my usual watching habit because it is a reality show. I usually go for drama series, as you might have noticed. 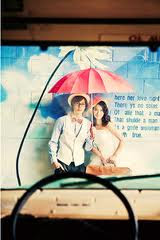 But this show turned out to be one of the best I have ever seen.

Kim Hyun Joong here was different. Since it is a reality show and with no scripts except for missions given to them, everything is natural. Hyun Joong showed his true personality which I found a far cry from his character in Boys Over Flowers. Apparently, he has such a complex personality. Complex in a good and funny way. He was dubbed in the show as a 4-dimensional little kid groom. His comments are witty though sometimes insensitive. His reasoning is sometimes absurd but funny. He may be blunt towards Hwang Bo at times but he remembers every detail, every word she has said and is capable of being very sweet to her. (He serenaded her and made 1000 paper cranes by hand for her.) 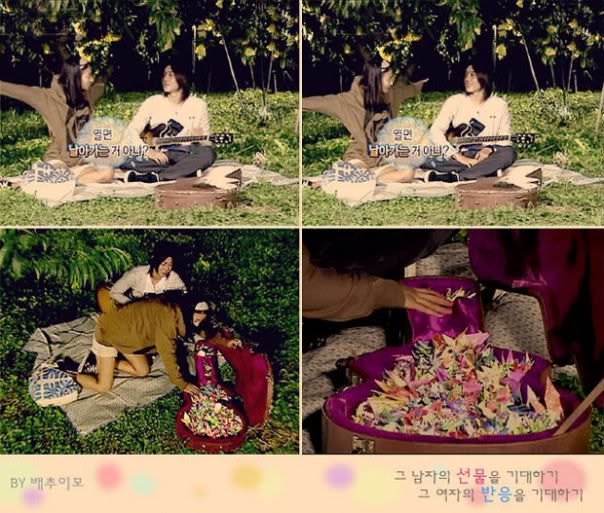 Hwang Bo is a bit tomboyish and was even nicknamed as a walking tool (she can open a bottle of Coke using a spoon!)  but surprisingly, her feminine side is even greater. She is a very good cook, who can do different kinds of dishes to the utter amazement of Hyun Joong. She can sew and knit. She had sewed a vest and knitted a scarf for Hyun Joong. She is caring but sensitive from time to time.But aside from being a good housewife, Hwang Bo is also at par with Hyun Joong in terms of competitiveness. It was showed through the many games they had as a couple in the show. 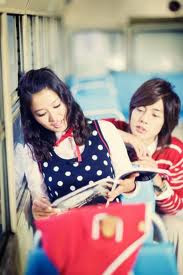 From the very first time they met, they don’t seem to be a good match. She is older than him by six years. He has a seniority complex. They had a hard time adjusting. They were uncomfortable with each other. They can’t look at each other in the eye without counting 1,2,3. They were dubbed as the awkward couple.
But as time goes by (and as the show goes on), it was proven. Yes, they were not a good match. They were, however, a perfect match for each other. Somehow, even if the show is make-believe, we felt that they were right for each other. 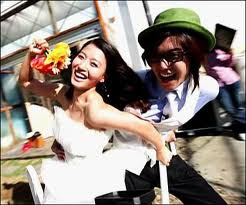 Why? <From here onwards, I’m gonna up the fantasy (which I actually hope to become real).> 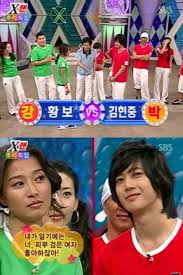 It all started three years ago (correct me if I’m mistaken coz’ some says it’s just two years ago), in a Korean variety show called X-Man (picture below). Kim Hyun Joong and Hwang Bo were both guests in the show. There were a bunch of clips. One was when they were pitted against each other. The next one, Hyun Joong was asked who he wanted to see in the team and he picked Hwang Bo. The reason was actually a tease but I, as a JoongBo lover, felt something when I saw that video clip. The other one was when Hwang Bo and Hyun Joong actually did a similar dance. When Hwang Bo was dancing, the expression in Hyun Joong’s face was priceless. After that, they were also seen in other variety shows.
That was three years ago! Who would’ve thought that they will end up in (a make-believe) marriage? When I saw that clip, I thought ‘isn’t that destiny?’. And seeing them as a married couple in WGM, with true feelings and real conversations and actions, my resolve that they were really fated for each other hardened. 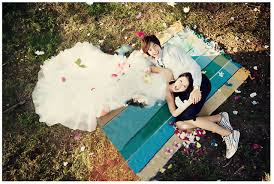 These past few days, I immersed myself in their world. I was totally captivated by them. I have never seen a couple so different yet so right for each other. Knowing that it would be hard to get a copy of the show, I spent a considerable amount of time downloading their video clips and burning them in CDs. That was actually the first time I ever did that for any show. I wasn’t yet satisfied so I scoured Youtube for fanmade MVs and I downloaded them all and burned them in CDs too. I was amazed by my patience. Maybe it was because of love.

It was also because I love them that I couldn’t help but get irritated to comments posted in Youtube while I was searching for MVs of them. One commented for Hwang Bo to get away from Hyun Joong because she’s so old for him, blah blah blah. I actually replied to that comment. I said ‘to go and watch all their cuts in We Got Married, you would see how perfect they are for each other. And if you already did, and you still think that way then I don’t know what’s wrong with you!‘ Hahaha. 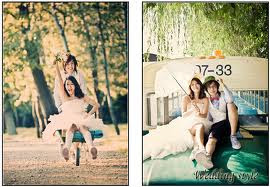 I also learned that it was actually because of this show and Hyun Joong’s performance in it that he was chosen to play Ji Hoo in Boys Over Flowers. Actually that was the reason why they decided to ‘divorce’. A few episodes up before their farewell and exit from the show, news came out that Hyun Joong was not quitting WGM but I guess schedules become hectic soon after that and BOF even went to film overseas. It was even clear in the show that Hyun Joong was tired all the time and he was sleeping a lot of times too. He was really pressured because of the drama. So there’s no other choice but to ‘divorce’ even if they don’t want to. (4-dimensional Shillang was replaced with a bad-acted Ji Hoo?) 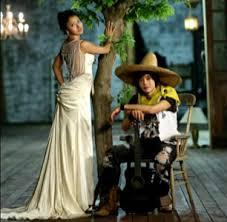 The last few episodes near the farewell were hard to watch. I decided to watch them all at night instead during the afternoon because I can’t help but cry. 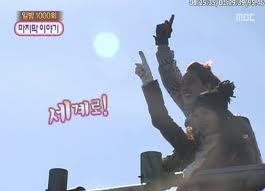 Last May 11, 2009, JoongBo lovers celebrated their supposed to be 1st Anniversary through posting fanmade MVs. They had this statement in some of the videos that were posted.
TO THE WORLD!!!DREAMS WILL LIVEWE HAVE TO BELIEVE
I also want to believe. I want it to be real.I am going to wait until one of them marries.
I want them together for real. 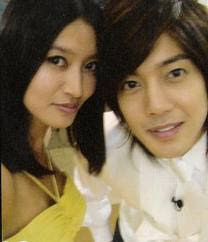 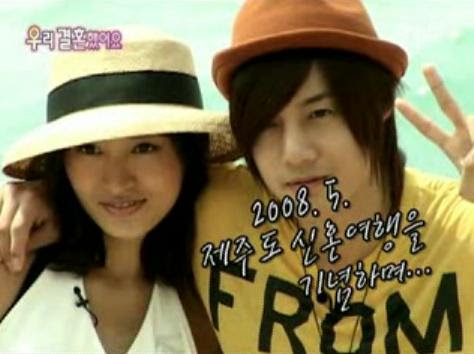 Hyun Joong: Hello Hwang Buin!It’s me the Star!If you always look at me and make a wish,your wish will always come true.So, Hwang Buin, even without me,don’t be sad.
Hwang Bo: 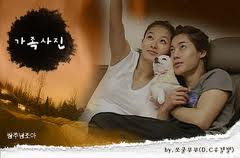 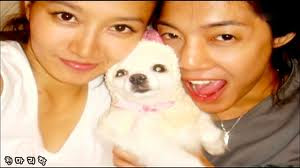 <By the way, Hwang Bo came to Cebu for a shoot with Infinity Girls. I’ve read some accounts of the people who were lucky enough to see her and hug her. They kept saying that she is so pretty and they were all starstruck. They’ve even give her gifts. So cute. They were so damn lucky.>