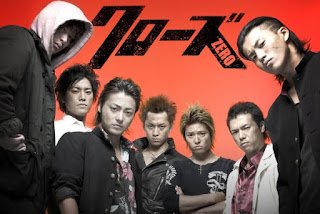 After watching the over dramatic Koizora, I decided to follow it up with this one. I didn’t know anything about it at first. All I know is that Oguri Shun won Best Actor for this film. MySoju described it as an action film. I have nothing against action films, in fact I like a lot of them, but they have to be well done in order for me to appreciate it. The poster didn’t help too. It was like a gangster movie.
But since I was way too choked up because of the previous movie, I went ahead and watch this film and never regretted it, not even once. It was one heck of a film. It was such a badass film and I liked it too much.
Crows Zero tells the story of Takiya Genji (Oguri Shun) who’s a newcomer to Suzuran All-Boys High School. He is there to conquer the school due to a deal he made with his father. If he conquered Suzuran, then Genji will replaced his father as the head of their yakuza group. However, he has a lot of people to defeat first, especially Tamao Serizawa (Yamada Takayuki) who was considered to be “King of A Hundred Beasts.” Serizawa is also the closest to conquering the notorious high school.
I was skeptical at first but just a few minutes into the movie and I was hooked. I honestly didn’t know the director but everyone was praising him and saying that he was such a good filmmaker and after watching Crows Zero, I have no choice but to agree a hundred percent. Takashi Miike is brilliant!
The movie is such a masterpiece. The style, the shots, the fight scenes, the pacing are spot-on. The direction is perfect and totally enthralling. The story is good, and even more is the storytelling.
Oguri Shun delivered a top-notch performance. No wonder he won a Best Actor Award. He was fantastic as Genji and his presence onscreen was remarkable that he brought the character to life. I wasn’t so into Yamada Takayuki when I saw him here because I wondered how he can be the “King of a Hundred Beasts” when he was short like that. But no, Takayuki proved how terrific he can be as Serizawa.
There wasn’t even one character to hate. All of them are interesting and their performance gave extra color to the movie. The fight sequences are done skillfully, realistic with a bit of manga trademarks. There’s also more than a tad of great dark comedy that makes the film even more fantastic.
Overall, with a good story, a great cast, fantastic acting, genius direction, amazing fight sequences, riveting storytelling, Crows Zero is a gift wrapped in a beautiful box complete with a red ribbon.
I would wholeheartedly accept a gift like this everyday.
Posted by Lei at 2:29 PM